We use our own and third-party cookies to improve your accessibility, to customise and analyse your browsing, as well as to display publicity and advertising based on your interests.

To continue browsing you must 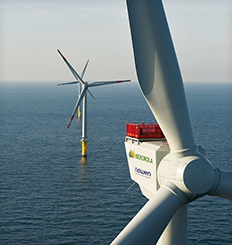 Offshore wind farmIberdrola, in partnership with RES and Caisse des Dépôts, was awarded the contract for the Baie de Saint-Brieuc offshore wind farm project in April 2012 following the tender launched by the government in 2011.A simplified joint-stock company (SAS), Ailes Marines, of which Iberdrola holds 70%, was established to ensure the development, construction, installation and operation of the future wind farm.

The wind farm is scheduled to be fully operational by 2020 and will comprise 62 Adwen 8 MW wind turbines for a total power rating of 496 MW. The wind turbines will be distributed over a surface of 75 km², the nearest wind turbine will be installed 16 km from the coast. The expected energy production will rise to 1,850 GWh, thus the equivalent electricity consumption of 850,000 inhabitants, including heating.